The Tenth Harbinger was last updated in 2018, during the second year of Donald Trump's presidency, so some current events, like the Coronovirus pandemic, are not mentioned in it.  Also, the presidency of Joe Biden throws a new light on prophesied events, especially the addition of probable strong Communist and globalist involvements in the takeover of the U.S.A.  However, the facts this book presents about the Scriptural and historical identity and destiny of the United States of America remain unchanged.  A pdf file may be downloaded or viewed from this page for FREE or a Kindle e-book or hard copy version may be purchased from Amazon.  Coming soon, Lord willing: a current, updated edition available as a pdf file or as a Kindle download or hard copy through Amazon will be published.

The Harbinger by Jonathan Cahn, on the New York Times Bestseller list for an amazing 52 straight weeks, opened America's eyes to the incredible accuracy with which nine harbingers (prophetic signs) derived from the Isaiah 9:10 prophecy foretold the destruction of the World Trade Center towers on 9/11/2001, the economic collapse of 2008, and possibly the end of the U.S.A. as a sovereign nation in the near future.

However, because Cahn failed to recognize the prophetic significance of an item that was discovered in the rubble of the North Tower of the World Trade Center on January 31, 2002, by the official New York Fire Department 9/11 photographer, Gary Marlon Suson, The Harbinger is incomplete.

The Tenth Harbinger explains, based on thorough historical documentation and solid Scriptural support, how the item that has been overlooked by Cahn and virtually all other expositors of Bible prophecy links Isaiah 9:10 to hundreds of other verses of prophetic Scripture that reveal the exact identity and soon-coming, three-fold destiny of the U.S.A., plus what Yehovah ("the LORD") commands His people in America to do before the soon-coming holocaust occurs, and it is too late for them to be saved.

When The Tenth Harbinger was first published in 2013, it didn't seem that its basic message - America will be modern, prophesied Babylon the Great, the most economically, militarily and politically powerful nation on earth at the "the end of the age" - was feasible, because Barack Obama was President of the U.S., and his administration was weakening and attempting to socialize and globalize America in every way.  However, after Donald Trump became President, in spite of fierce opposition from the Left, the globalists, the mainstream media—practically the whole world—he made astonishing strides in strengthening America’s economy, the military, border security, and economic and political ties with other nations, and apparently had the U.S.A. headed toward what he pledged at his inauguration - "greater than ever" (the most dominant superpower in the world).

Nevertheless, after Joe Biden became President, the tide was reversed again, and America is headed, faster than ever, toward its prophesied, three-fold destination: takeover from within, then annihilation "by fire," then total, physical annihilation by a giant object from space.

Download or view the FREE 2018 PDF file of The Tenth Harbinger NOW, and understand exactly what is happening and will soon happen in America according to Bible prophecy and what you need to to about it, before it is too late.

Three Ways to Get the Book

It is not the purpose of this ministry to profit from the sale of the Truth. Our whole purpose is simply to get God's sure Word of prophecy concerning the identity and destiny of the United States of America, and what He commands His people to do about it, into as many hands as possible . . . before it is too late. Therefore, we are making the contents of the book available in one format absolutely FREE and in two other formats at very nominal costs that barely cover the cost of manufacturing and distributing the book.

Left-click to open or right-click to download this PDF file here. 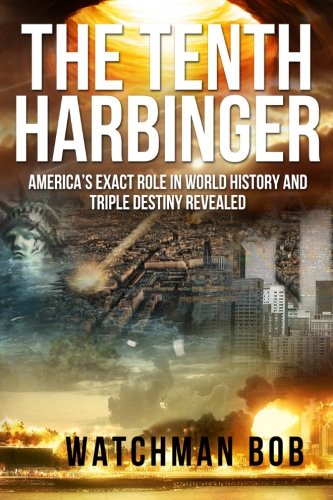 Return to the Home Page.

Have your say about what you just read on this page! Leave a comment in the box below.

Stay Informed!
Current Events in the Light of Bible Prophecy

Get Involved!
Be a Watchman.